Purcell Marian Athletics thanks everyone that helped make this night special for our new inductees, our current Hall of Fame members, and the special friends and family in attendance. 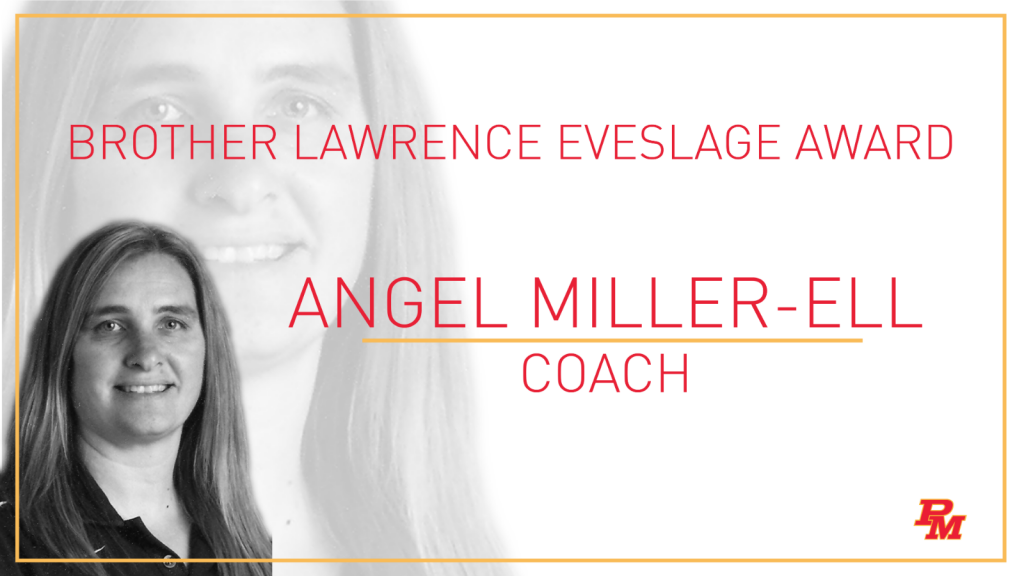 It’s hard to name anyone who has stayed more involved in the sport of volleyball in this area than Angel Miller Ell.  Angel went to Delta High School in Northern Ohio and was a very good athlete in volleyball. From there she went to Miami University and among other honors, she was First Team MAC 1990 and 1991, AVCA All District II in 1991, 2nd Team Academic All-MAC 1991, 1990 MAC Tournament MVP.  She was the 2nd player in school history to amass 1,000+ kills and 1,000+ digs in career, and still holds the season kill record with 527 kills in 1991, ranking ranks top 10 in several career and season categories.

Her team won the MAC Championship in 1990.  She also went to the U.S. Olympic Festival in 1990 and 1991 and won two bronze medals.  She earned a bachelor’s in health appraisal and enhancement from Miami in 1992 and was inducted into the Miami University Athletic Hall of Fame in 2008.

In 1992, she began her varsity coaching career in volleyball at Purcell Marian High School, coaching the girls team from 1992 until 2001 with a 107-128 record.  She coached the boys team from 1994 until 2007 and amassed a 178-150 record.  Many of her PM athletes went on to play in college, including Max Holt who went on to play for Team USA and win a bronze medal in 2016 among other achievements.

After Purcell, she coached and served as Athletic Director at St. Thomas More Grade School winning many league and city tournament championships between 2007 and 2013.  She then coached at various levels at Sycamore High School, McNicholas High School, and Indian Hill Middle School between the years of 2007 and present day.

She has also served as a Head Coach and Assistant Coach for the Cincy East Volleyball Club and more recently served as the Head Coach for Cincy Crush 14U Gray Regional team.  She was also a Class 1 volleyball official from 2005-2014, recognized the different years with a Golden Whistle Award for outstanding contributions of sports officials beyond their officiating.

Angel has been married 24 years to Rob Ell (Purcell Marian ‘84) and they have two children, Adrian and Ethan. 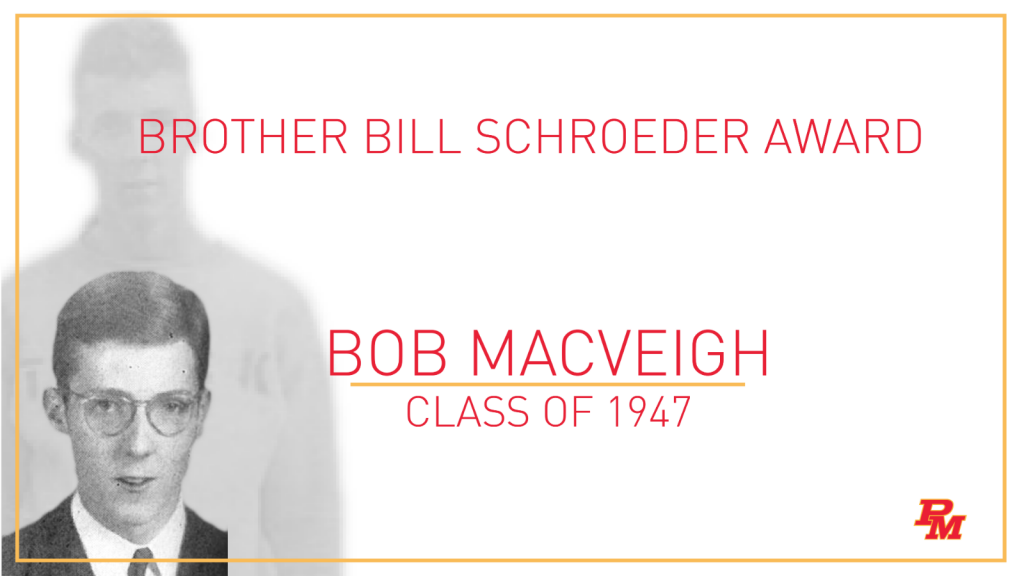 Bob, perhaps more than any other local individual, represents the bridge between the way the local running community existed around 1950 and what it evolved to during the latter 20th century. His life and contributions to the sports of track and field, cross country, and road racing have spanned more than 70 years of unbroken involvement.

Bob started high school at Chaminade, trying out for football, but was unable to make the cut. His family then moved to Cincinnati where he attended Purcell and decided to try managing.  He managed football, basketball, and even swimming. When he asked Coach Brother William Schroeder if he could manage the track team, Brother Bill persuaded him to give track a try. He immediately found himself finishing ahead of the school’s other distance runners. He was named Captain of Purcell’s first cross country team. He finished 9th at Districts, which was good enough to qualify him for State. He also was named captain of the track team, running the 880 and mile before graduating in 1947.

He then went to UC and joined the cross country and track teams. Bob soon realized he was more of a sprinter than a distance runner and proceeded to shine at the shorter distances. Eventually, Bob broke UC’s 18-year-old quarter mile record by running 48.6, a record that stood at UC for another 18 years.

In 1951, Bob placed third in the 440 behind Herb McKenley, the Jamaican 440 Olympic champion and world record holder. In 1952, he had times good enough to go to the Olympic Trials but had to pass due to a lack of funds.

After graduation, Bob worked as an accountant before being drafted into the Army at the age of 26.  He was able to compete and travel with the U.S. Army track and field team. Upon leaving the Army in 1955, Bob founded the Cincinnati Track Club, a group dedicated to competing at high levels. Bob not only drove his athletes to meets, he ran in them, and his wife would type up the results. Shortly after Bob was hired by Federated Department Stores where he worked for 32 years. In 1960, he was transferred to Boston. Almost immediately, he became involved with the Boston Athletic Association, sponsoring organization for the Boston Marathon, and competed in the Boston Marathon 11 times.

In 1972, he and 40 other runners went with a USA Master’s team to participate in meets in Europe. He placed 8th in the 400 meters in London at the World Master’s Championships.

Eventually, Bob moved back to Cincinnati. With his reputation as a runner and organizer, he was chosen to serve as the race director for the Heart Mini Marathon in its first 13 years beginning in 1977. The Heart Mini was the first big time national race in Cincinnati. He is proud of his time as a meet director for a race that has raised millions for the Heart Association. He also helped form the Great Bearcat Run, a Homecoming race on UC’s campus, whose proceeds went to the UC track and field team. In 2017, he was recognized by the Cincinnati Runners Hall of Fame.

As an athlete, he showed excellence at a variety of distances, breaking records along the way. Although he’s no longer able to run competitively, he’s enjoyed staying active in promoting the running initiatives he began so long ago (track clubs, track meets, and road races). 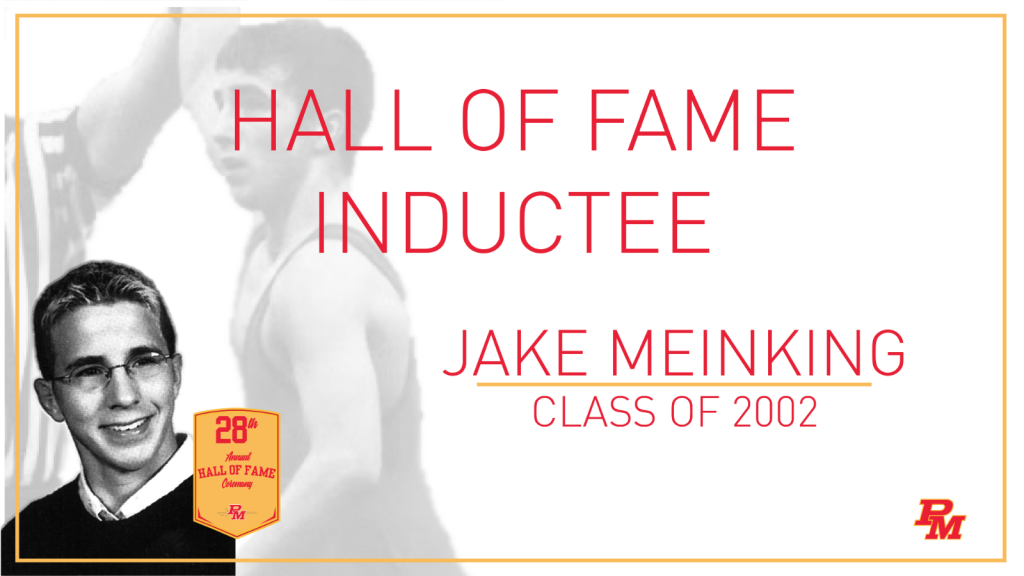 Growing up in the hallways of Purcell Marian, Jake has been around the Cavalier family for most of his life. His father, Terry, held a variety of positions at Purcell while his mother, Kathy, volunteered at the school throughout the years.  Jake’s older brother Joe (’97) and both his sisters, Jen (’98) and Jess (’05), went through Purcell and competed for the Cavaliers. All were three-sport athletes for four years, earning both team and individual awards.  Jake is joining his father Terry in Purcell Marian’s Athletic Hall of Fame.

As a three-sport athlete for all four years, Jake competed in cross country, track, soccer, and wrestling.  As a senior, he was named the Most Improved Player for the Cavalier soccer team. Despite his involvement in other sports, wrestling was his primary passion.  A four-year varsity starter, he was a three-time State qualifier, two-time GCL champion; three-time Sectional champion; one-time District Champion.

Additionally, he is the all-time winning wrestler in Cavalier history with 132 career varsity wins while setting seven other school records, including team points in a season (243.5), technical falls in a season (8), near falls in a season (82), technical falls in career (20), near falls in a career (237), team points in a career (801.50), and individual tournament championships in career (12).  Furthermore, Jake was MVP for both his sophomore and senior years and the team captain his junior and senior years. In his senior year, he was honored as the SAA Male Athlete of the Year, the Kylius Jones Award winner, the Scholar Athlete Award, and was a nominee for the GCL Joe Quinn Award.

Outside of Purcell, Jake was an AAU Wrestling National Champion in 2000 and an AAU Wrestling All-American in 2001 while representing Team Ohio in the AAU Junior Olympics.  He was a member of the Ohio National Dual Team, competing in the USA Wrestling National Duals.  Even after high school, he continued as an Assistant Coach for Team Ohio in the AAU Junior Olympics, with his team winning gold in 2003 and bronze in 2004.

Upon graduating, Jake continued his wrestling career at Division II, Mercyhurst College in Erie, Pennsylvania, graduating in 2006 with degree in hotel, restaurant management.  After traveling the world, working for various hotels and travel companies, Jake now resides in Denver, Colorado, where he co-owns a travel company specializing in corporate meetings and events worldwide. 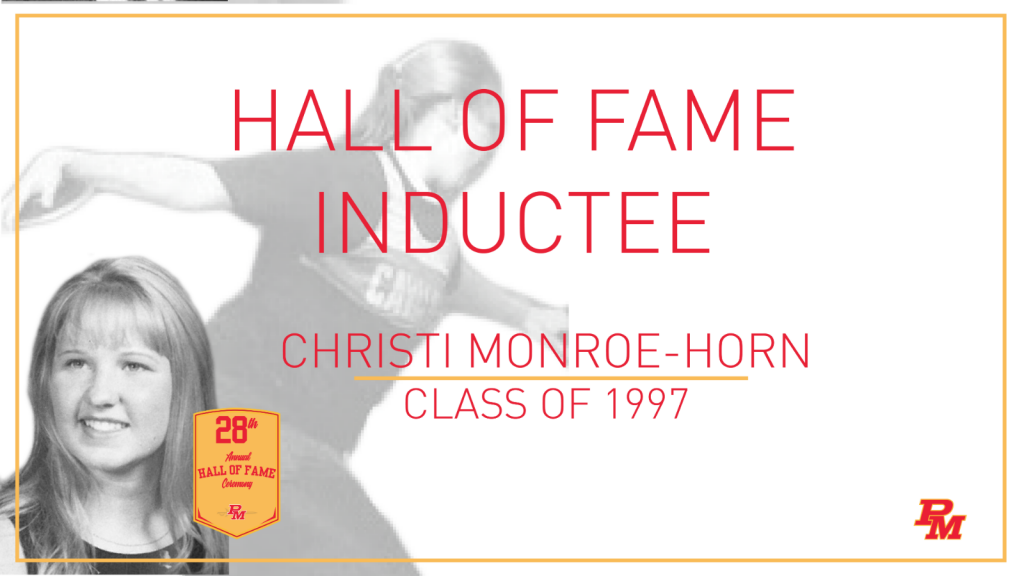 A two-sport athlete, Christi is the daughter of Donna Wermeling Monroe (Regina ‘70) and Jeff Monroe (former assistant and head track coach at Purcell Marian) and the sister of Scott Monroe (Purcell Marian ‘00). 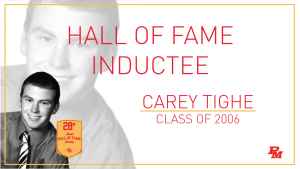 In cross country, Carey had an outstanding two-year career.  As a junior, he was the GCL Runner-Up, the District Champion, finished 12th at the State tournament, and was named First-team All-State and the Division II-III Runner of the Year by the Cincinnati Enquirer.  He also set the Purcell Marian School record in the 5k (15:42).  He played football during three seasons, and in his senior season, once competed as a defensive back one night and as a top-ranked runner in cross country the next day.

In wrestling, Carey was a four-time District Qualifier, and a three-time All-GCL North First team selection.  In 2004, he helped lead the Cavs to the GCL-North Team Championship.  As a senior, he was the GCL tournament runner-up in his weight class, a Division III Sectional Runner-Up, named the Team MVP for the second time, and recorded his 100th career varsity win.

In Track, Carey was a four-time Varsity starter and a four-time Regional Qualifier, and a State Qualifier in the 1600m and 3200. He was also a member of the Varsity 4×800 Relay team that set a school record of 8:12.

He finished his Cavalier career earning a cross country and track scholarship to Ohio University. Carey came back to Purcell Marian to coach cross country, wrestling and track.  In 2012, he joined the United States Army and is currently serving as a Special Forces Weapons Sergeant with the 5th Special Forces Group of Fort Campbell, Kentucky.

No Events This Week

Events are added by athletic staff.
View All Events