It was a very successful 2019-2020 winter season at Purcell Marian High School.  Girls Basketball finished the season with a record of 21-7 and finishing with a record of 11-3 in the GCL-Coed.  Their success continued long into the postseason as they were district champions, and ended the season losing to Anna by 1 in the Regional Final.  The Cavs saw great success in the GCL this year highlighted by wins over Dayton Carroll and Roger Bacon who both finished ahead of Purcell Marian in the GCL standings.  A few GCL stat leaders were Kara King who finished first in the GCL averaging 14.5 points per game, 4th in rebounds per game with 7.0, and 2nd in steals per game at 2.6 per game.  Mckenna Haugabook finished the season at the top of the GCL in many stats including finishing 6th in points per game with 11.7, 5th in rebounds per game with 6.7, 3rd in assists per game with 3.3, and 5th in steals with 2.3 per game.  Janay Rose finished 2nd in the league shooting 55.6 % from the field and finished 2nd in blocks per game with 1.2.  The team finished with 2 all-conference selections, 2 all-district selections, and 1 all-state selection.  The Cavs graduate 2 seniors in Santia Cravens and Kamya McNeal.  They look to build upon this successful year and make a run at a state championship next season. 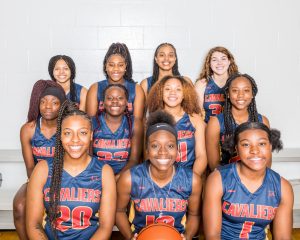 The Cavaliers Cheer team was under new instruction this past winter, with 2004 alum and former Cavs cheerleader, Dawn Ellington, taking over the reins replacing longtime coach, Kim Demko. The cheer team immediately took to Coach Ellington and her style of coaching. Coach described the past season as “challenging but rewarding”. While the boys’ basketball team struggled at times throughout the season, the cheer team remained poised and spirited. During this years’ post-season state tournament run, the 8 varsity cheerleaders provided energy to fuel the Cavs on-court success until the very last second in the district finals lost to Trotwood Madison. 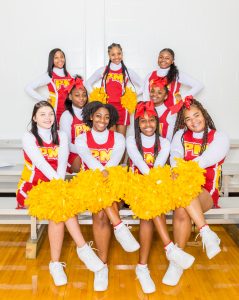 The boys and girls bowling programs each had success this past season with the boys beating Summit Country Day twice and beating Clark Montessori.  The Cavaliers were lead Eric Duggar and Greta Klusmeyer who averaged 178 and 135 respectively.  Eric had a series high of 439 and Greta’s series high was 337 while Zionna Wilson led the girls with a series high of 359.  The highlight of the season was Eric Duggar made it to districts for bowling.  Our bowling teams have continued to see growth in numbers and talent.  As a young team with two seniors (Tristan Kelly, Will Hann) the sky is the limit for both of these teams in the future. 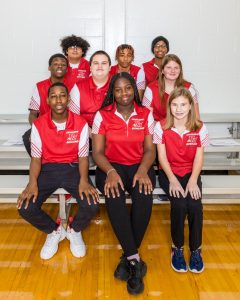 The swimming program faced a trying year with only 3 dedicated swimmers.  In a year faced with adversity, the three swimmers showed up every day and gave it their all.  The swimming team will lose two seniors in Samuel Bellman and Michael Hill.  We thank them for all they have given to Purcell Marian Athletics. 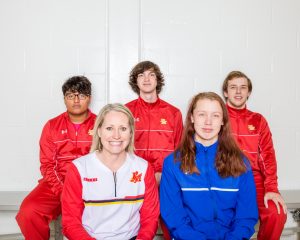 Boys basketball continued their success this year finishing the season with a record of 10-16 while going 6-8 in the GCL-Coed.  The record does not show just how great of a season the Cavs had.  A few of the team highlights from the season are wins over Fenwick, Badin, and Roger Bacon.  The boys really turned on the heat when the playoffs started beating  5th seed Woodward, Taylor,  4th seed GCL foe McNicholas, and eventually losing to the number one seed Trotwood-Madison in the District Final.  Jared Baldock lead the team in scoring averaging 11.2 points per game in the regular season and 19.0 points per game in the postseason.  Dustin Davis finished 12th in the league averaging 2.6 assists per game. This is the 5th time in 6 years that the boys have advanced to the district final.   Senior Jared Baldock was named 1st team all-conference and Sophomore Andre Simmons was named 2nd team all-conference.  Jared would go on to be named 3rd team all-district.  The Cavs will be losing three seniors in Laurence Chrisitan, Nate McMillian, and Jared Baldock who will go on to continue his basketball career at Wittenberg University.  Congrats to the Cavs on another successful season. 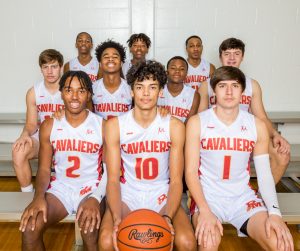